NEW DELHI: DLF vice-chairman Rajiv Singh has sold 92 lakh shares of the realty major for Rs 198 crore through an open market transaction. Singh, who is also a promoter… Read more » NEW DELHI: In a bid to ascertain whether there was any “siphoning” of funds, the Supreme Court on Wednesday asked real estate major Amrapali Group to provide details of the… Read more » 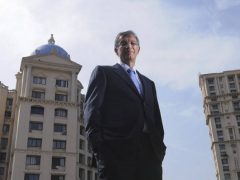 MUMBAI: The Brihanmumbai Municipal Corporation (BMC) today announced that personalised property tax bills will be issued to the people who own flats in those buildings that will get Occupation Certificates… Read more » NEW DELHI: Crisis-hit Jaiprakash Associates has deposited Rs 100 crore as per the direction of the Supreme Court in the case related to delays in delivery of flats by its… Read more » GURUGRAM: The Haryana government has ordered a probe into alleged illegal sale of 46 acres of panchayat land in two villages here to private builders. The state government ordered the… Read more »