NEW DELHI: India’s Classic Marble Company (CMC) has entered into an exclusive tie-up with global tiles leader, Kalesinterflex to market its products in the country. Kalesinterflex is one of Turkey’s… Read more » NOIDA: The director of a private builder’s group here was arrested today by the revenue department after the firm allegedly failed to clear a stamp duty of Rs 12 lakh,… Read more » 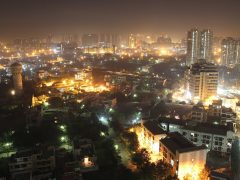 NEW DELHI: As many as 97 special purpose vehicles (SPVs) have so far been constituted to execute projects in cities selected under Smart Cities Mission, according to housing and urban… Read more » NEW DELHI: Failing to auction the iconic Taj Mansingh hotel in Lutyen’s Delhi in two attempts, the NDMC has decided to relax the eligibility criteria for bidders and reduce the… Read more » By: Aradhana Aravindan | John Geddie SINGAPORE: A rush to tear down and redevelop buildings in Singapore has prompted calls to conserve ageing properties that symbolise the country’s recent history… Read more » NEW DELHI: Cement maker Prism Johnson said that it has got a lime stone mine on lease from the Madhya Pradesh government. The mine in Satna district has about 77… Read more » NEW DELHI: The government of India set the ball rolling for further selling of its stake in NBCC and HUDCO, in addition to an initial public offering (IPO) of the… Read more » NOIDA/LUCKNOW: The Uttar Pradesh government said on Thursday that it has suspended Muzaffarnagar Additional District Magistrate Harish Chandra, who has had a spat with a retired Army colonel over an… Read more »