NEW DELHI: Realty major DLF’s net debt declined 35 per cent to Rs 3,416 crore during the first quarter of this fiscal on better sales and fund infusion from promoters…. Read more » 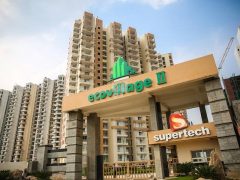 NEW DELHI: Supertech on Friday agreed to handover flat possession to 14 buyers and also bear their EMI or house rent costs till then, according to Uttar Pradesh RERA officials…. Read more » AHMEDABAD: In a relief to tribals living near the Statue of Unity in Narmada district, the Gujarat High Court on Thursday ordered ‘status quo’ with respect to the acquisition of… Read more » NEW DELHI: The Supreme Court on Tuesday cancelled the registration of the embattled Amrapali group under the Real Estate Regulatory Authority (RERA) and the lease of its properties granted by… Read more »