NEW DELHI: Although demand for residential properties have recovered in the past couple of months to pre-pandemic levels, the overall primary sales is likely to fall 40-50 per cent in… Read more » 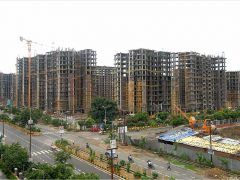 NEW DELHI: The Reserve Bank of India (RBI) for the second time in two months has raised its benchmark interest rate by 25 basis points on inflationary concerns and will not… Read more » NEW DELHI: Housing sales rose marginally, just 3 per cent, in the first half this year to over 1.24 lakh units in eight major cities despite fall in prices, Knight… Read more » By: Costas Pitas LONDON: International estate agency Savills said it anticipated housing sales in Britain will be hit by a June 8 general election, but that its overall performance this… Read more »