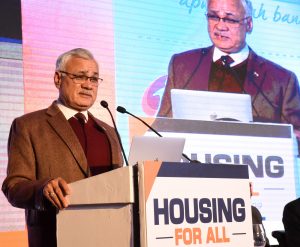 The Secretary, Ministry of Housing and Urban Affairs, Durga Shanker Mishra addressing at the launch of the E-Commerce housing portal & All India online home-buying for ready-to-move-in homes and unveil of the Real Estate Sentiment Index Q4, 2019, in New Delhi on January 14, 2020.

NEW DELHI: National Real Estate Development Council (NAREDCO), an apex body, formed under the aegis of Ministry of Housing & Urban Affairs, Government of India, today announced the country’s first e-commerce housing portal – ‘HousingForAll.Com’, to create a trusted, secured and seamless journey for home buyers in India and abroad, along with giving a boost to Prime Minister Narendra Modi’s ‘Housing for All’ and ‘Digital India’ initiatives.

Launched by Durga Shanker Mishra, Secretary, Ministry of Housing & Urban Affairs, Government of India today, along with the NAREDCO’s leadership, the e-commerce housing portal will host a 45-day All-India Online Home-Buying Festival for ready-to-move-in homes, with over 1,000 projects expected to be listed.

The initiative was proposed and announced by Hardeep Singh Puri, Minister of State (I/C) for Housing and Urban Affairs during the First National RERA Conclave on November 4, 2019 in Lucknow to come up with a housing e-commerce platform.

Under the guidance of the Ministry, NAREDCO is happy to announce and launch this e-commerce platform which is a joint industry effort supported by various Industry Bodies, Members of National Real Estate Development Council (NAREDCO), CREDAI-MCHI, Confederation of Indian Industry (CII), Federation of Indian Chambers of Commerce and Industry (FICCI), Associated Chambers of Commerce and Industry of India (ASSOCHAM), Builders Association of India (BAI), and Indian Merchant Chambers (IMC).

Created by the Industry for the Industry, this platform seeks support from respective state governments, RERA authorities, developers, banks and housing finance institutions to create a transparent and seamless journey for home buyers.

The first-of-its kind online home buying initiative for projects that have received occupancy certificates (OCs) is directed towards creating a seamless, safe and transparent home-buying experience for home buyers and creating positive sentiment for the real estate industry, boosting confidence and faith amongst home buyers, enhancement of liquidity flow in the industry and contributing to growth of the economy.

After the launch, the portal will be open for one month only for the real estate developers to register their projects (January 14, 2020 to February 13, 2020). The portal will be opened for home buyers with a 45-day SALE Period starting from February 14th, 2020. For the initial 15 days, buyers will be able to view offers and shortlist their homes and will be able to start making the purchase of homes from March1, 2020 till March 31, 2020.

The portal will help buyers in accessing best priced inventory by builders for a limited time to take full advantage of best pricing. Buyers can also shop in comfort of home and book directly online. Buyers will be able to view complete listing info including floor plans, room dimensions, video tours of units and external views looking out from windows / balconies. They will also be allowed to create and save custom micro searches and properties to list of favourites.

Buyers will also be able to directly book/reserve a unit from the portal with a refundable payment of only Rs 25,000. They will also get ‘Money Back Guarantee’, where their initial buyer deposit made on portal is completely secured and fully refundable in case buyer elects not to purchase the unit. Customers will be immediately notified if any units they have shortlisted are already sold.

The event also unveiled the Knight Frank–FICCI–NAREDCO Real Estate Sentiment Index Q4 2019 survey, which revealed that after staying in the pessimistic zone (below 50 mark) for two consecutive quarters, the current sentiments of the real estate stakeholders in India has revived to the optimistic zone of 53 in the October-December quarter of 2019 (Q4 2019).

The report further indicates that the future sentiment score that had gone in the red for the first time in the preceding quarter of Q3 2019 has bounced back to 59 in Q4 2019. Though in the optimistic zone now, the outlook of stakeholders remains cautious with a majority of them opining that the market will stay at the same levels and not go down further in the coming six months.

Mishra,said “India has been rapidly improving on the Ease of Doing Business index. Technology adoption and prowess has made it possible across sectors. Real estate is not isolated. The sector has evolved and has become regularised and professional. As we continue to move ahead with developments, there was a huge requirement for an authentic source of information on the existing projects and the inventory. The portal, www.housingforall.com, will not just bring authentic information to all but will also offer a credible and real time property related data from around the country. The site that is dedicated to homebuyers will allow them to take an informed decision. I congratulate the entire sector stakeholders on the launch and also express my gratitude to the NAREDCO team, who has been instrumental in bringing the portal to consumers.”

Dr. Niranjan Hiranandani, National President, NAREDCO, said, “The sector has gone through turbulent times so far. With improving sales and a recovery that we have witnessed in the past year, it is time that the industry joins hands and helps the consumer quickly make a purchase decision. The portal is designed for the all industry stakeholders with a powerful backend platform which manages and displays the most accurate inventory data in the market, and allows buyers to book their flats directly online.”

Buyers will have the ability to see floor plans, aerial videos, amenities, unit specifications, even video walkthroughs for each project.

According to government data, out of 1.12 crore demand of urban affordable houses, 1.03 crore houses have been sanctioned, 60 lakhs houses have been grounded and 32 lakh houses have been completed. “The launch of the e-commerce portal indicates the growth and evolution of the organised space, and how the discerning homebuyer of today is looking for a complete disclosure of the project details,” added Dr. Hiranandani.

Rajeev Talwar, Chairman, NAREDCO, said, “The rising levels of transparency and professionalism in the India’s real estate market has made it attractive for domestic as well as global investors. Reforms like the implementation of RERA and GST, and the introduction of REIT have increased the returns potential of this market. Reforms have not only revived the consumer sentiment but have also helped in raising capital. HousingForAll.Com is yet another effort in garnering support of today’s smart consumer, who wish to buy in quality projects. This way, developers have a platform, where homebuyers will have an option to buy from some of the finest projects of reputed developers”.

Commenting on other benefits that builders can achieve, Parveen Jain, Vice-Chairman, NAREDCO, said, “Through the listings, builders have been given a platform, which can create a ‘Call-to-Action’ from buyers. Builders will have the ability to create ‘special promotional sales’ and have a communication channel with all buyers, whose requirements match the project. This way, they can achieve huge savings on the marketing cost. Channel Partners can automatically register Buyers directly with the Builder for protection of compensation and elimination of future disputes.”

Rajan Bandelkar, President, NAREDCO Maharashtra, said, “The aim of this event and the platform would be to not just generate sales but also inspire confidence in the minds of the consumers, developers, banks and HFIs and other stakeholders and allied industries. Such an exercise in long run would have a far-reaching effect and positive impact on the economy of all the States and Union Territories, hence the nation at large.”