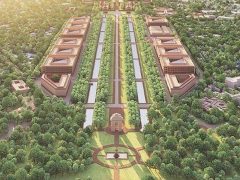 NEW DELHI: The Supreme Court Friday adjourned to November 16 the hearing on a petition challenging the change in land use of a plot where the new official residences of… Read more » NEW DELHI: Realty major DLF Ltd has reduced its net debt by 16 per cent during the July-September period to Rs 3,985 crore on improved cash flows amid a revival… Read more »