NEW DELHI: Godrej Properties, a part of business conglomerate Godrej Group, is one of the leading real estate developers in the country, has announced that it has achieved record sales… Read more » 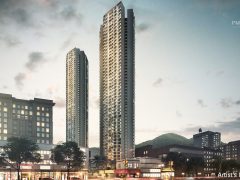 NEW DELHI: The Maharashtra government will once again start collecting one per cent metro cess on property purchases from April 1 in Mumbai, Thane, Nagpur and Pune cities with the… Read more » NEW DELHI: Registration of housing properties in the Mumbai municipal region fell by 11 per cent year-on-year to 15,717 units during March on higher base, according to Knight Frank India…. Read more » NEW DELHI: Shares of Mahindra Lifespaces hit the 20 per cent upper circuit on Thursday as the company announced the acquisition of some land from Mahindra & Mahindra  (M&M) group…. Read more »