NOIDA: The Gautam Buddh Nagar administration has sent a proposal to the Uttar Pradesh government for the acquisition of land for the second phase of the Noida International Airport in… Read more » NEW DELHI: As many as 393 infrastructure projects, each entailing an investment of Rs 150 crore or more, have been hit by cost overruns of more than Rs 4.65 lakh… Read more » PATNA: The process of acquiring 76 acres of land for a depot of Patna Metro project is expected to start from next week, an official said on Thursday. According to… Read more » 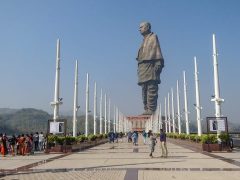 AHMEDABAD: In a relief to tribals living near the Statue of Unity in Narmada district, the Gujarat High Court on Thursday ordered ‘status quo’ with respect to the acquisition of… Read more »

NEW DELHI: The Uttar Pradesh government has approved a fund of Rs 1,260 crore for acquisition of land for the proposed Jewar airport in Gautam Buddh Nagar, according to an… Read more » AHMEDABAD: As many as 40 new petitions have been filed in the Gujarat High Court by farmers challenging the land acquisition process for the Mumbai-Ahmedabad bullet train project. A division… Read more » NEW DELHI: As many as 307 farmers Monday consented for acquisition of their land – the maximum in a single day so far – for a proposed international airport at… Read more » MUMBAI: The process of land acquisition in Maharashtra for the bullet train project, including in Palgarh district, would be completed by this year end, a top official of the NHSRCL… Read more » MUMBAI: The Godrej Group has moved the Bombay High Court challenging the proposed acquisition of its prime property in suburban Vikhroli for the government’s ambitious bullet train project between Ahmedabad… Read more »